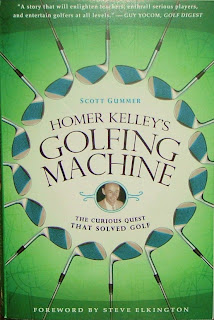 If you are a die-hard golfer, chances are you are obsessed with swing mechanics, always trying to find that one swing key to gain distance and narrow the shot pattern. So if you are in this category, it is likely that you have encountered Homer Kelley's monumental work The Golfing Machine. Kelley's ground breaking and eccentric study of the golf swing became cult-like in the world of golf instruction.

But what would drive a man to spend virtually his entire life in the pursuit of solving the conundrum of the golf swing? The answer lies in the explanation of how a man could play golf for the first time and score 116 and then six months later with no play or practice in between shoot a 77. Kelley's lifelong passion became the 39 stroke difference between those two scores.

Scott Gummer has taken a sensitive and judicious examination of the man and his work in an effort to help us appreciate the genius behind the most comprehensive study of the golf swing. The Golfing Machine is slightly more technical than the NASA Flight Manual but in Kelley's mind all the technicalities were necessary to completely dissect the golf swing. Yet, Gummer does not attempt to explain The Golfing Machine to us but rather reveal the man. He accomplishes this unmistakably. You will come away with a much more acute understanding of how one man, a non-golfer, could accomplish such a task.

Gummer also gives us insight into the book itself which took on a life of its own. Kelley labored for over twenty years before he published the book. When he did, the seeds of The Golfing Machine grew slowly. But Kelley persisted and finally found a teaching disciple in Ben Doyle and eventually playing disciple in Bobby Clampett. Gummer relates this life to us throughout the second part of the book.

If you are a golf swing aficionado, and especially if you are fascinated by The Golfing Machine, Homer Kelley's Golfing Machine is an absolute must read. It gives us greater awareness into the mystery we know as the golf swing.
Posted by Dave at 6:44 AM 2 comments:

How much are you willing to pay for a round of golf?

So the question for today, my dear golfing friends, is what is public golf access? To put it another way, how much are you willing to pay for a round of golf?
What prompted this reflection is the upcoming U.S. Open at Pebble Beach Golf Links. Pebble Beach, as you know, is open to the public – if you have enough money? The current price is $495 for a round of golf.

For most this is a bit exorbitant, a touch on the high side of the green fee scale. Others will go great extremes to come up with the prescribed fare. For a few classic stories on what it might take for most of us to unfold $495, we recommend Randall Mell’s fun story at TheGolfChannel.com.

To put all of this is perspective, allow me to relay this short story. We spent the summers of 2005 and 2006 in Buffalo, Wyoming. Now Buffalo has a wonderful, scenic 18-hole golf course. It sits right at the base of the Big Horn Mountains and is appropriately designated as the Buffalo Golf Club. The course is regularly listed in the top five in the state. At the time we were there, the cost of a membership was $450 for a couple to play unlimited golf. (The cost is now $500 per year.) This included only the greens fee. Carts, if you so desired, we an additional charge. Yes, there were a couple of steep climbs from green to tee, but if you sucked in your gut, walking was no problem. My common statement to folks was that you could play a whole season in Buffalo, WY for about the same cost as one round of golf at Pebble Beach.

Straight Down the Middle 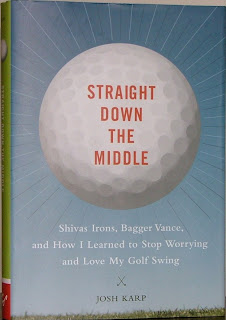 Ever since Chevy Chase exhorted us to “be the ball,” golfers have been seeking the elusive “zone,” a place in the time-space continuum where physical ability has been layed aside and the mind conquers. Or perhaps the quest began when a shepherd first struck a rock with a crooked stick. Or perhaps this does not matter.

What does matter is that someone has actually documented that chase, lived (in a keep-your-sanity sort of way) to tell about it, and actually come out on the other side as a golfer more focused on the spirit of the game. Josh Karp's most recent volume Straight Down the Middle: Shivas Irons, Bagger Vance, and How I Learned to Stop Worrying and Love My Golf Swing takes us on that journey.

Let’s face it, every golfer is trying in some way, shape or form to lower his or her score. Golfers will try just about anything. They’ll listen to any piece of swing advice from virtually anyone, always searching for the magic that will drop the score even one or two strokes per round. But very seldom do they pay attention to the mental game.

So, is it possible to transform one’s game and lower one’s handicap from the inside-out – increased attention to the mental game – as opposed to the outside-in – give a try to the latest and greatest swing tip?

Karp sums up the thesis of his quest in Chapter 2 when he states, “…that the actual ‘playing’ of a round of golf occurs in roughly 180 seconds… What’s happening the rest of the time, where our mind resides during that time, is something we pay almost no attention to, yet which profoundly impacts our performance.” From this realization the pursuit is on.

He goes from guru, to sensei, to golfing Buddha in an endeavor to find peace of mind in the mind boggling game of golf. As we travel with Karp we discover what seems like an endless number of golf instructors totally focused on the playing the game with just the mind and damn the swing.
Not only does Karp tell us his story – the toils and the triumphs – but he also passes along some useful (at least to him) instruction and drills such as the Jug McSpaden drill (pgs. 61-62). He also presents us with an apt description of the relationship between golf and spirituality, the struggle to make the ball do what you want it to do through only the force of our will.

How did all the senseis, gurus, Zen masters and whatevers help? Well, for one brief two month period beginning on August 8, 2008, Karp found himself in the zone … or whatever Zen golfers choose to call it. Golfing nirvana set in. But just as quickly and suddenly as it arrived, it was taken away by the ever vengeful golf gods.

And how does it all end for Karp? Let’s just say he is at peace with his golf game.
Posted by Dave at 5:24 AM No comments: 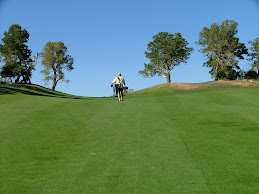